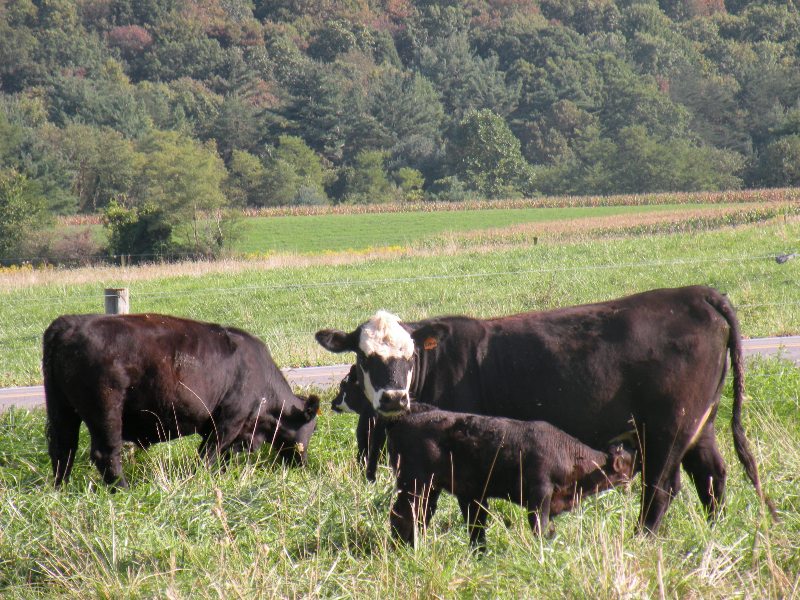 Angus Cattle at Blue Rooster Farm When we originally started with cattle, it was because our retail lamb customers wanted beef and we had some extra grass on the place. We never intended to become cattle breeders. But we met Sam Wylie from Octoraro Angus while searching for a bull to use for our first breeding season.  Sam has been breeding what he calls "seed saver" Angus cattle for over thirty years, utilizing older, well proven, and consistently line-bred Angus bloodlines.  Sam's low input management system lets nature be the primary "decider" about which cows stay in his herd. And his unerring focus on maternal efficiency and longevity has produced a gene pool of ecologically fit and thrifty cattle. It's hard to buy more than a couple bulls from Sam and not end up intrigued by the art and science of cattle breeding. Over time we developed strong opinions and the evidence to support them about what kind of cattle are most profitable for us.

We like a beef animal that begins to physiologically mature at 12 to 13 months. This ensures that most of the animal's second grass season (first one off of mom) goes directly into building muscle and fat in the steers, and reproductive capability in the females. Since time and grass is money, then putting either into growing "air under the belly" is a bad investment for a grass farmer.

We select for smaller frame cows (three to five frame score) that raise their first calf as a two year old and don't miss a beat, continuing to go strong into their teens. Their heifer calves should do the same, while their male calves should consistently reach a live weight of 1,000+ pounds on lignified orchard grass on or before a 95 degree day in July (without any fly control or chemical worming), and yield at least 500 lbs of retail product, with tender steaks and a nice, round rib eye.

Management System  Cows are bred to calve in April and May. First calf heifers are run with stocker/finishing cattle and the ewe/lamb flock. Mature cows are used as gleaners. Calves are left on cows most of their first winter, weaned onto high quality hay in time for cows to dry off prior to next year's calving. Yearling steers are butchered anywhere from 900-1,200 pounds depending on orders. We practice management intensive rotational co-grazing with sheep, and are moving towards high density, pulsed grazing of the mature cow-calf mob and the ewes once the lambs are weaned.  Most heifer calves are given a chance to join the breeding herd, but are culled heavily based on mothering ability, disposition, and fertility in their first and second year of production. We often have several well proven four and five year old commercial cows available for sale in the fall that are too good to turn into beef, but too replicated by retained daughters to keep in our herd.  We will begin posting these offerings on a "Cattle for Sale" page this fall.

Pedigrees Used Herd sires have been from heavily line-bred Rito 707 descendants.  Our past herd sire, Octoraro Addison 901 was close to a perfect replica of Rito 707.  We were fortunate to have all three of our registered females produce heifer calves out of him before we had to salvage him due to a leg injury as an seven-year-old.  Sam's Octoraro Addison bull, an OCC Anchor son from his recently deceased Gammer 203 foundation cow, also figures heavily in our herd.  Our first two registered cows were Addison daughters, and our current herd sire, Octoraro Addison 001 is the result of a half-sib mating between Octoraro Addison and an Anchor daughter from Sam's Gammer cow line.   We will continue using this bull on our existing registered herd, line-breeding daughters back to Rito 707 through Sam'sgood AI bull, Octoraro Rito 503 and to two other old pillar bulls, Emulation 31 and Shoshone Viking GD60 through his Octoraro Emulation 310 bull.  We will also be utilizing semen from Sam's Octoraro Ballot STO 6 bull (recently sold to Monte Howry in North Dakota) as well as the New Zealand sire from Sustainable Genetics, Glanworth Waigroup 130. Both of these bulls exhibit extreme calving ease and the smooth, well packed "Scottish" Angus phenotype we're after without sacrificing udder quality, maternal function, or environmental fitness.  We feel they will provide an excellent complement to the Rito base of our herd by improving topline, scrotal size, and calving ease.  It will likely take nearly a decade to transition our herd to all registered females, but we hope that a disciplined, line-breeding approach within our vertically integrated grass-finishing and direct marketing operation will allow us to develop a uniquely valuable strain of angus genetics.  Our goal is to hold our first sale of registered, foundation quality seedstock in time to use the proceeds to pay for our daughter's first year of college.  So much is at stake in our breeding decisions!

Back to Our Livestock