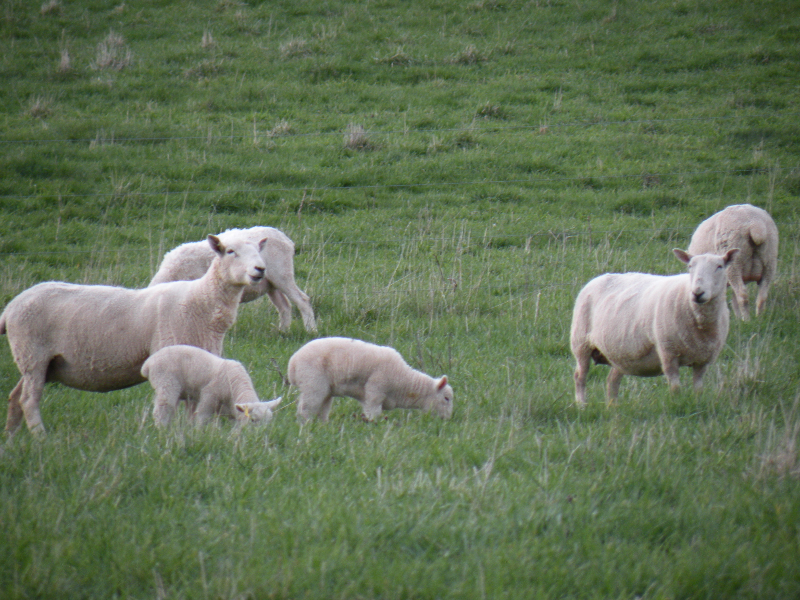 Roy began raising sheep on his family's vegetable farm when he got out of college in '92, beginning with  five commercial ewes purchased for him by church friends.  By the time we bought our own farm in '98, the flock had grown through attrition to almost thirty ewes.  At the time, we were alternating between Tunis and Dorset rams, lambing in the barn in January and February, and selecting for prolific, attentive, calm mothers.

To quickly populate our own farm and begin getting some return from our investment in fencing and water development on the place, we purchased 200 ewe lambs from Jack Monsour in Bedford County the winter of '98.  Jack uses primarily North Country Cheviot (NCC) rams in his 900+ ewe flock.  Since we had been having a lot of foot problems after coming to our place, we liked the fact that Jack never trimmed his sheep's hooves.

Going from thirty to 200 ewes quickly turned us into hands off shepherds and sold us on North Country Cheviots as an ideal breed for low-input, grass-based retail lamb production.  At six to eight months of age, our Tunis/Dorset cross lambs seemed to still be stuck in some gangly, adolescent frame-growth race, while the NCC lambs began to swagger around like the little pumped up mesomorphs they are. This early maturation of skeleton and musculature allows us to harvest a small, but high-yield retail lamb carcass, often directly off of the ewes at weaning, which is a tremendous advantage to us in terms of both managing our pasture stocking density and spreading our sales season both early and late in the season.

While NCC ewes are neither as productive (milky) nor as prolific as most of the popular commercial sheep today,  they are the perfect fit for our low-input, part-time farming system.  Granted, they are not an easy breed to work with if you're a control freak!  They're rather high strung and flighty, a lot like deer.  And they will absolutely test your fences.  But give them grass and let them go, they will do the rest for you.

Our ideal ewe is one that raises one healthy lamb as a yearling then two lambs every year after that until she's ten or more.  We very seldom have triplets, and don't really want them as they complicate lambing season tremendously.  But ewe's that don't raise at least seven good lamb by the time they are five are culled to ensure we place as much selection pressure on fertility and prolificacy without going beyond the seemingly logical limit of "two teats, two babies."

In 2001, when we realized we were pregnant with twins and Roy began working full-time with the state, we made the difficult decision to sell our flock down to just the number of ewes we needed to meet our established retail lamb market.  We kept thirty of our best ewes, most of them very typey NCC, and two very good NCC type ram lambs out of a couple of the best mommas.  And that was the last we thought much about the sheep or sheep breeding until 2007, when we finally got out of the hospital routine and realized we were still using the same two rams, now on five years of their own retained daughters!

By then, we were also very committed to the NCC as a breed, so we located a good seedstock producer near Bloomsburg, Arnold Stackhouse, and purchased two registered ram lambs.  We added five registered ewes from Stackhouses flock in 2008, and will begin gradually transitioning our now seventy+ ewe flock to all registered females over the next number of years.

Back to Our Livestock